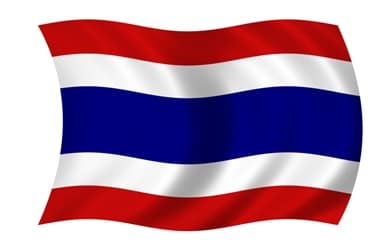 When you come to Thailand, sometimes you will see Thai people stand still for a moment at 8 am and 6 pm. Do not wonder why they are standing to respect Thai national anthem.

The anthem was composed a few days after the 1932 coup in the very similar tune to the national anthem of France, La Marseillaise, and was first broadcast in July 1932. The original lyrics were by Khun Wichitmatra.

In 1939, when the name of the country was changed from Siam to Thailand, a competition was launched to create new lyrics, with those by Luang Saranuprapan winning. Prime minister Phibunsongkhram ordered the anthem to be played every day at 8.00 and 18.00, and ordering the populace to stand up to show respect for the nation. That law is still in force today.

Thailand unites flesh and blood of Thais.
Nation of the people; belonging to the Thais in every respect.
Long maintained [has been] the independence
Because the Thais seek, and love, unity.
Thais are peace-loving;
But at war we’re no cowards.
Sovereignty will not be threatened
Sacrificing every drop of blood for the nation
Hail the nation of Thailand, long last the victory, Chai Yo (Cheers).

Learn Thai Poem | The 20 words with the letter ใ