that has been fermented with toasted rice and salt between 15 days and one month. Plaa ráa is primarily made from one of two types of freshwater fish: mudfish (also known as snakehead fish or plaa chon) and pla gradee (pictured on the left). The mudfish is larger and has more meat.

Plaa ráa has an unpleasant smell before it is mixed with other ingredients. When preparing Northeastern food outside of the region, some people drop plaa ráa, from the recipe. Thai people say that durian that is overripe has gone “ plaa ráa “. Also, people who swear far too much have a “ plaa ráa ” mouth.

Outside of Thailand, you find plaa ráa sold in glass jars. 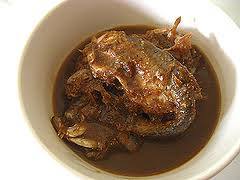 Until recently, the plaa ráa you’d buy in markets (or make yourself) would still have bones in it so you’d have to strain or pick out the bones, but I have discovered pla rah with no bones. The label on the bottle says, ‘Cream Style’ and is much easier to use! It looks like a thick paste.