One of the most beautiful Thai festivals that takes place in Thailand every November is Loy Krathong. This is celebrated on the first full moon in November so the dates change every year. The word Loy means to float, and a Krathong is a banana leaf cup. People place a candle and incense sticks in their Krathongs and then float them on a local river, canal or pond or even hotel swimming pool. As the people float their Krathong they ask for forgiveness in polluting the waterways and also for good luck in the coming months.

Loi Krathong history is not exactly known. It is said to be have been started by a royal court lady called Nopphamat during the period of Sukhothai. King Rama commented in his writing in 1863 that actually the festival was in fact adopted by Thai Buddhists in respect of Buddha from a Brahmanical festival. The candle represents Buddha with its light and the floating illustrates re-leaving oneself from bad acts, hatred, anger and bad thoughts. Some people put finger nail clippings or hair to symbolize letting go. Others often put money in the kratong to help bring them good luck for the coming year. It is a celebration to thank the Goddess of Water, Phra Mae Khongkha | พระแม่คงคา. The ritual pays respect to the water spirits and in particular Phra Mae Khongkha.

Krathong are traditionally made from a slide of banana palm stem and decorated with carefully folded and arrange banana leaves. The end result can be quite spectacular. There are many competitions to see who can make the best krathong. Many large organisations including government organisations spend a lot of money creating elaborate kratongs to show merit on behalf of their staff. Other kratongs can be made of bread which being biodegradable is seen as a better way to celebrate and makes the river animals happy. After Loy Krathong almost all the water ways of Thailand are littered with these floating objects. There is a mass clean up campaign organised by local government and private enterprises to clear up the krathongs from the water ways. 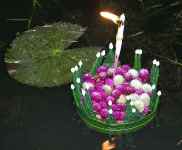 I hope you enjoyed my short blog Thai lesson.

If you would like to learn more Thai or English please consider trying a free trial lesson with us. We can teach you online via Skype, at our school or at a location of your choice in Bangkok. We can even mix these delivery options giving you a very flexible program.