Thai Language Hut Facebook the best in the World

In a stiff competition to find the best Facebook language sites Worldwide, jointly organized by LexioPhiles popular language blog and Bab.la the well known online dictionary and language learning website, Thai Language Hut school was voted 21st out of a 1024 nominated and 100 shortlisted Facebook language pages. The competition included famous sites from the BBC (Ranked 11th) and Oxford University Press (Ranked 15th). In a competition where the majority of the sites were focused on English or German the Thai Language Hut Thai – English site stood out. Votes were cast by users of LexioPhiles, Bab.la and the shortlisted Facebook language pages. 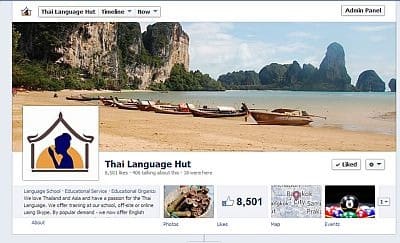 Nut Shee, Manager of Thai Language Hut Language School said, ‘We are delighted to get this recognition but the real thanks go to our Facebook fan base who keep us all going with their messages of support and ideas. We are really facilitating an open community of Thai’s and foreigners with an interest in English and Thai cultures and language.’

The school which teaches Thai and English as private lessons, one teacher to one pupil, in Sukhumvit 43 and Online using Skype, commented that the Facebook site was really a part of school policy to give something back to those that cannot afford to learn Thai at their or another school. And also for those that are studying Thai or English and want the chance to practice their language or cultural knowledge.

The Thai Language Hut facebook website is supported by a blog site www.learnthailanguage.org with some 450+ short Thai lessons and YouTube website http://www.youtube.com/user/thailanguagehut with over 240 videos to help learners of Thai and English language all of which are developed by Thai Language Hut School. Nut Shee concluded, ‘We are committed to making learning Thai and English languages fun and accessible to all. “

About
For more details about the competition please see http://en.bab.la/news/top-25-language-facebook-pages-2013

Paiboon Publishing was established in 1996 in Berkeley, California, USA by Benjawan Poomsan Becker. The company also has an office in Bangkok. The unique Thai/Western links have helped Paiboon Publishing produce and publish high quality, user-friendly language books, audio, Smartphone apps and other learning materials that allow people to learn and communicate effectively. Our products are sold in bookstores throughout Thailand, online direct from our office in the US and distributors in Europe.

Get with it – Language Learning delivered online and to mobile phones