Sawatdii ka. I hope today is a good day for all of you. And today I have a topic that might be interesting for you. It is about Thai mourning culture.

Mourning is a part of Thai-Buddhist tradition. We do it to remember and show deference to our relatives, friends, respective people, the King, Queen and other members of the Royal Family.

In the past to mourn the King, Queen or someone from the Royal Family, the ancient Thai traditional mourning dress would be all in white. The white dress was regarded to be full clothing so no need for accessories such as a black armband.  Another ancient mourning tradition was the shaving off the hair to 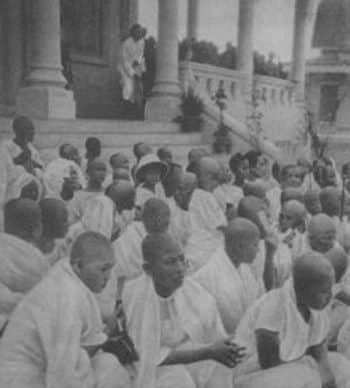 show respect and ruefulness for the Royal Family; the person who shaved his or her hair would have to be the one who worked for the deceased. Except with the demise of a King then everyone in the Kingdom had to shave. However, at Royal command at the death of any senior Royal Family member, the whole country could also be required to shave.

Once in the period of Rama I (1782-1809), there was a command from the King to have everyone shaved their hair to mourn for his younger brother – Somdet Phra Bawornrajchao Maha Sura Singhanat (Thai: สมเด็จพระบวรราชเจ้ามหาสุรสิงหนาท). So, everyone except the King and people who had tuft hairstyle had to shave off their hair. The mourning tradition of hair shaving was abolished during the reign of King Rama VI (1910-1925) since he did not want to trouble his people.

The traditional mourning white dress and hair shaving are the tradition from the Ayutthaya period (1351-1767). In the Rattanakosin period (1889-to date), people still followed the original white mourning way of dressing until in the period of Rama VIII (1934-1946), when influenced by Western culture wearing a black dress became popular and accepted.

Nowadays for formal mourning dress, people wear a white uniform with a black armband on his or her left arm.

For Thai mourning tradition for everyday people’s death example; for close friends or relatives, often the older may wear black to mourn a younger person’s death. For a not so closely acquainted person the elder can wear dark blue colours.

These days the general polite mourning custom is everyone can dress in white or black. To mourn the heart must be clear to reflect upon the life of the deceased. It is a good feature of a humble person.

On this occasion, Thai Language Hut and all teachers here would like to express our devotion in King Rama IX by dressing in black and white to mourn, grieve and to demonstrate the gratitude to the benefactor of Thailand.