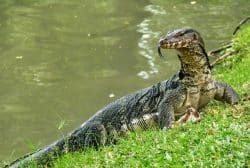 The Water Monitor is an animal which has had a strange past. This animal is not liked by most Thai’s (hence the old name ….translates as fffing animal!). It lives in dirty water and it is thought to bring with it a disease and bad luck; also, more importantly, it eats your chickens and other farm animals so overall it is less than popular.

The King took pity on this unfortunate animal whose name was so rude that you could call it by it’s name in polite conversation. You would refer to it as …’that animal’ or sàt ná:n /สัตว์นั้ this would lead to a number of confusing conversations. The King renamed the Water Monitor carefully selecting a name that would be good luck and revered by Thai people: Hence the name Dtua Ngern Dtua To:ng which translates as Money body and Gold body …both items well respected by Thai. In fact, although this means you can talk to about the Water Monitor without the risk of causing offence Thai still do not love this animal.

Dtua Ngern Dtua Hia is a substantial lizard weighing in at about 10-25kg and growing up to 3 meters although most are about 1.5 meters and about 10-15kgs. These lizards swim also and climb trees. If you visit Bangkok you can see them in the parks. Note how the Thais tend to stay away from them. If you’ve never been to Lumphini park, the Dusit zoo you are likely to see these lizards. And do not be fooled, these lizards can run fast, faster than most people!