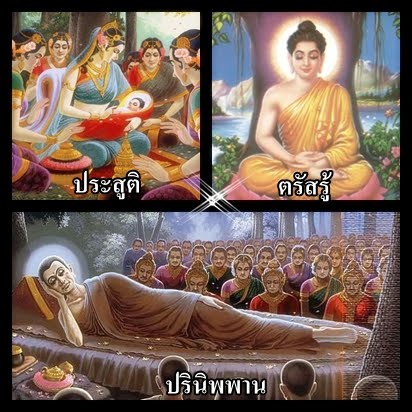 Visakha Bucha Day falls on the full moon day of May (the sixth lunar month) in each year. The word Visakha Bucha comes from the word Visakhapunnamipuja in Pali which means Worshiping on the full moon day of the sixth month. Visakha Bucha Day marks the three important events that occurred on the same day, namely; His Birth, His Enlightenment, and His Passing away (Parinibbana). It is celebrated in Thailand with a Public Holiday. Most Buddhists will go the Buddhist Temple and pray and circle the Temple 3 times in a candlelit procession to celebrate each of the 3 important events.

On the full moon day of May (the sixth lunar month), known as Visakha Bucha Day, before 623 B.C. there was born to the Shakya clan, a young prince, named Siddhartha Gautama (Rahula) at Gotihawa near Kapilavastu City, Lumbini Grove in Nepal, close the Indian border in the foothills of the Himalayas. His father’s name was King Suddhodana Gautama, who was the king of Kapilavastu City. His mother’s name was Queen Sirimahamaya who lived in Thevathaha City. His mother, unfortunately, passed away seven days after his birth. He was later taken care by Pajabodi (his mother’s younger sister). At the age of 7 years, he was sent to study with Visavamit who was then a famous and well-known teacher and then at 16, Prince Siddhattha Gautama got married to a very beautiful Princess named Yasodhara or Bimba.

From Nepalese Prince to Enlightenment

In his teenage years, while travelling to the Royal Garden, Prince Siddhartha saw four sights, he saw an old man, a sick man, a dead body, and a monk (Brahmin monk). The sight of these people made him realize a luxurious life would not let him reach the real nature of life and denied this he could not find true happiness. It was because of this that Prince Siddhartha renounced his worldly royal life to be a homeless monk at the bank of Anoma river. He sought the source of real happiness of life by wandering from place to place meeting people at all levels in society, praying, meditating and fasting.

When Rahula was 35 years old, on the full moon day of May (the sixth lunar month), he attained enlightenment which means he found the origins of real happiness in life which became the creed for Buddhist teachings.  At that time, he was called the Buddha which means the Awakened One or the Enlightened One. Soon after his enlightenment experience, he started to preach his teachings to others to help them also find the middle way and enlightenment. He first taught the Panjavakkiya (the Group of Five Monks)-  who promoted his teachings. His first teaching was called the Dhammacakkappavattana Sutta (setting into motion of the wheel of Dhamma – the starting of the teachings of Lord Buddha).

Having attained  80 years old Lord Buddha passed away, again on the full moon day of May (the sixth lunar month). He died under a pair of Sala trees in Kusinara, Malla state. By the time of his death, he had firmly established his teachings. These unique three events (His Birth ประสูติ), His Enlightenment(ตรัสรู้), and His Passing away (ปรินิพพาน Parinibbana) took place on the same day and month and are celebrated in Visakha Bucha Day.

I hope you have learnt something new and that you have enjoyed this blog.

If you would like to learn more  Thai you are welcome to look at our other blog lessons, or see our videos YouTube site or follow us on Twitter, Linkedin or Google+ – links at the top of our page.