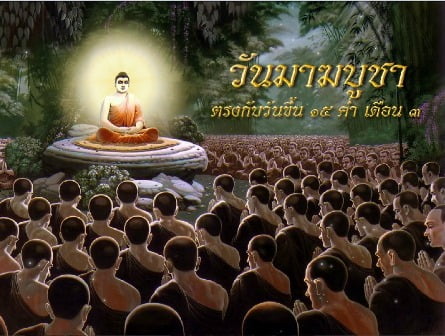 Hello everyone. Welcome back to our Thai blog again 🙂

In this blog , we will learn about Thai Culture and some vocabulary about Makha Bucha Day (วันมาฆบูชา /wan maa-ká-buu-chaa/).

It commemorates two separate events that occurred on the same date 45 years apart, during the Buddha’s lifetime 2,500 years ago. The first event was the coming together of 1,250 monks from all locations and directions, to meet and be ordained by the Buddha. This event occurred seven months after the Buddha began his teaching. The second event, which occurred 45 years later, was the Buddha delivering his teachings shortly before his death. Both of these events occurred on the day of the full moon of the third lunar month, a month known in the Buddhist Pali language as ‘Makha’. The ‘Bucha’, also a Pali word, means to venerate or to honor. Thus, Makha Bucha Day is for the veneration of Buddha and his teachings on the full moon day of the third lunar month.

Makha Bucha Day represents a great deal in terms of the development of Buddhism in Thailand. It is a highly ceremonial event and in Thailand it’s an event that was only recently revived as part of Thai Buddhist tradition. The Supreme Patriarch of the Marble Temple in Bangkok, Kittsobhana Mahathera, did this in 1957. Before 1957, the full moon day of the third lunar month was celebrated as a Buddhist Holy Day. Because of local ceremonies that occupied this day in different parts of the country, the Makha Bucha ceremonies today take on the different flavors of the various locales.

At this time in the evolution of Buddhism and Buddhist principles in Thailand, it is important to understand how the majority of Thai people view Buddha and the Buddhist philosophy.

Activities to be observed on Makha Bucha day

‘ตักบาตร /dtàk-bàat/‘: Offering food to the monks and novices (in the monk’s alms bowl).

‘ทำบุญ /tam-bun/‘: Making merit by going to temples for special observances, making merit, listening to Buddhist sermon, giving some donations and join in the other Buddhist activities.

‘รับศีล /ráp-sǐin/‘: Keeping the Five Precepts, including abstinence from alcoholic drinks and all kinds of immoral acts.

‘เวียนเทียน /wian tian/‘: Attending the Candle Light Procession around the Ubosot (hall of a temple), in the evening of the Vesak full moon day.

* Practice of renunciation: Observe the Eight Precepts, practice of meditation and mental discipline, stay in the temple, wearing white robes, for a number of days.

I hope you have learnt something new and that you have enjoyed this lesson.