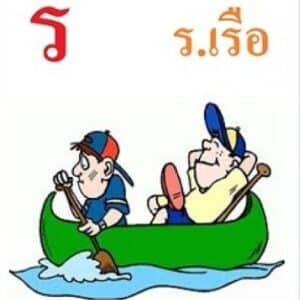 “ร”is one of the 44 consonants of the Thai alphabet. Many expat Thai Language students get very confused when they find the “ร” in different positions/ locations. “ร” can work as an initial sound, a final sound and also a vowel sound. As a Thai Language Teacher, I find myself having to often explain this to my Thai Students. The details below will give you hints about how to use “ร” in different situations in reading and writing Thai words.

3.2“รร” without any final sounds or final letters come after it works as “-a” sound (- ัน)

4.“ร” as when it comes after initial sound/ initial letter without any vowels between…it gives “…awn” sound(“…อน”)

If you want to learn more about the Thai Language with our Thai language school, you are very welcome to stop by our website: