Telling Time in Thai | Why is it so complicated?

Telling Time in Thai| Why is it so complicated?

Have you ever wondered why telling time is so difficult in Thai?  Today you will learn some of the history about telling the time in Thailand and why it is a little complicated.

Telling time in Thai is divided into two types: are formal and informal.

In the past hundreds of years ago, when clocks were not widespread; most people did not have a watch or clock at home.  At that time only some specific places like city halls or temples had a clock. Therefore, it was necessary to give a signal to tell the time to everyone, so that all people can time their daily lives accurately.  The way people sent the signal that was mentioned above was using different tools (music instrument) at a different period of the day. Thus it became that Thai time units became different words for telling time at each period of the day. 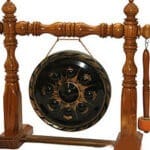 During the day time, people use a kind of Thai music instrument named Khong (Thai: ฆ้อง) to send a signal by hitting it. The sound of the Khong is “moong (Thai:โหม่ง)”.  That is why the word moong cháao (Thai:โมงเช้า) , bàai moong (Thai:บ่ายโมง) and moong yen (Thai:โมงเย็น) is used in Thai time unit.

The sound of Klong is “dtûm (Thai: ตุ้ม)” That is why the word tûm (Thai: ทุ่ม) is used as a Thai time unit for telling time at night. And after midnight people changed from hitting the drum and hit the plaque instead to make the sound softer that would tell the time to people who were still awake and would not bother people who were resting at the time. In addition, the sound of hitting the plaque was not clear enough to be taken as a word. People then used the word dtii (Thai: ตี) which means to hit for telling the time from 1 to 5 am.

I hope you enjoyed reading this blog and hope this blog is useful for you.