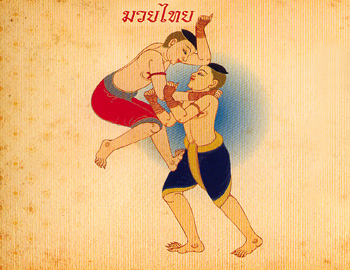 Muay Thai is a Thai martial art which came into existence in the 15th or 16th century. Muay Thai is known by foreigners as ‘kickboxing’ or Thai Boxing because it involves kicking. Besides feet and fists, elbows and knees are also used.

The first famous Thai boxer was Mr. Khanom Dtom who was captured as a prisoner pf war during the Ayuthaya period. Khanom Dtom received his freedom by defeating about ten Burmese soldiers in hand to hand fighting.

Thai boxers and their trainers are very close to each other. The boxers have great respect for their trainers, which they express before every match by performing a boxing dance in the ring in honour of their trainer. It normally takes about five minutes and is accompanied by music from a Pii instrument. Each boxer has different dance movements.

Today, Muay Thai is popular among foreigners, both visitors and those overseas. Some only like to watch. Some want to learn. There are many Thai boxing schools all over the world.

Thai Boxing programs are broadcast regularly on television. Now Thai people abroad who have installed a special satellite dish can watch Thai boxing shows and other programs from Thailand that are broadcast via the Thai TV Global Network.