Hi everyone. In this Thai language blog, we will learn about the Thai Buddhist Festival of วันอาสาฬหบูชา Asalha Bucha Day and วันเข้าพรรษา Khao Phansa Day. This falls in the month of July, the date is fixed by the lunar calendar so every year the actual date changes.

วันอาสาฬหบูชา Asalha Bucha Day is recognised as a major  Thai Buddhist Holiday and holy day. The holy day is determined as being on the full moon day of the eighth month of the lunar calendar year, normally this is in July. It is on this day that Lord Buddha delivered the first sermon known as “Dhammachakkappavattanasutta” in which he imparted his wisdom to five followers. One of the followers named “Kotanya”, took on the wisdom about the knowledge of life that Buddha had taught and petitioned that Buddha make him a monk. This event was the first time the Triple Gems were completed. The Triple Gems describe the important elements of Buddhism. They are Buddha himself, Dhamma (Buddha’s teachings) and the Sangha (the brotherhood of monks). This was the start of Buddhism as a religion hence is seen as a major celebration and holiday to Buddhists worldwide and particularly in Thailand where Buddhism is the dominant faith. 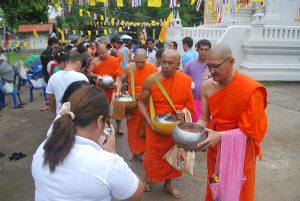 วันเข้าพรรษา Khao Phansa Day begins Buddhist lent, an annual three months for Buddhist monks. Buddha detailed that during the three months of the raining season, monks should stop travelling thus avoiding the dangers of travelling in the rainy season and avoid possibly killing new plants or insects. The monks instead would stay fixed in their one temple and use this time to self-improvement, mindfulness and compassion.

Buddhist Lent falls between the eighth lunar month to the eleventh lunar month after Asalha Bucha Day. This is often the time when laymen decide to become monks to bring merit to their family and to spend time in the temple reflecting upon their lives and finding solace.

Celebrations for Khao Phansa are generally similar to most Buddhist festivals with prayers, incense and circulating around the 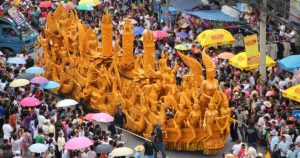 temple in a clockwise direction (normally 3 times) with one exception, Khao Phansa  เข้าพรรษา is also known as the Candle Making Festival แห่เทียน where people donate candles to the temple to be used during the rainy season. The tradition is based on the belief that donating candles would make help make monks brighter and smarter as they would be able to study more as they cannot leave the temple at night. Some of the candle donations have become extremely elaborate and can be called pieces of art in their own right. The celebration now involves in many areas candle processions where the candle gifts can be enjoyed by all before being given to the temple the most famous Candle Festival is in Thailand is in Ubon Ratchathanee where the candle decorations are taken to an extreme :-).

During these festivals, alcohol is not sold and it is also promoted by the Thai government that the 3 month period of Buddhist Lent is a good time for lay people to give up alcohol.

I hope you have enjoyed learning a little about Asalha Bucha Day and Khao Phansa Day.

We wish you well ka.